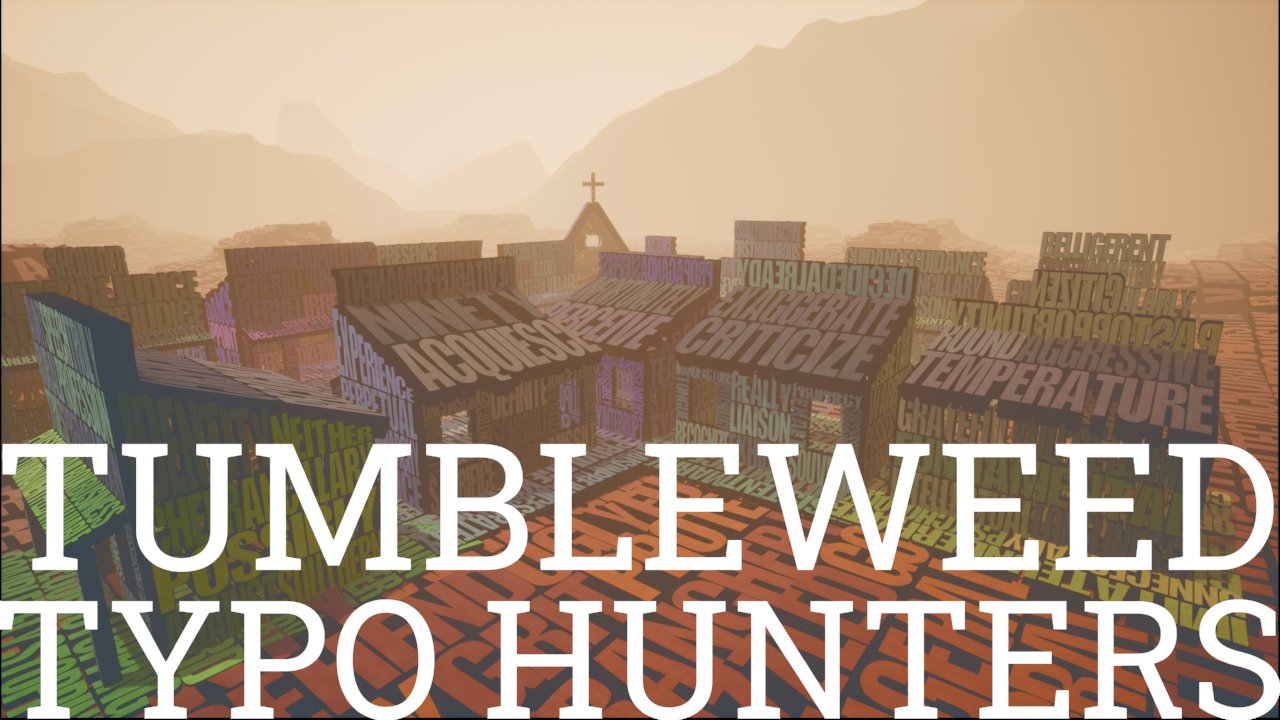 In this gritty wild-west world made entirely out of 3D text, make a living as a freelance bounty hunter, tracking down misspelled words for a lucrative bounty. Play through unlimited procedurally-generated towns and jobs. Experience tense high-noon showdowns, make a stand defending towns against overwhelming typo bandit gangs, and track down fugitives for bounty as you try to stay out of debt and stay alive. Form a posse with up to 4-person co-op to take on more challenging jobs that would be too difficult for a lone typo hunter. Do you have what it takes to be a typo hunter? Instructions: - Find and shoot down only the misspelled words. - Don't shoot correctly spelled words or damage property. - Type the correct spelling of a foe in the chatbox to load up a temporary 1-shot-kill named bullet. - Don't go into debt! You are running a business and need money for bullets, doctors, and food/lodging. - Press tab to bring up the level-up/options menu. Please report all bugs. Thank you! Community Content: - Rich Text by TeamMeta - Multiplayer Costume Example by riffraff - Fluid Mannequin by estlogic - FPS Meter by standardcombo

Please report all bugs in detail! Constructive feedback and ideas welcome! In this huge release, I've added a bunch of changes to help new players and lone players, as well as some fixes: - FIXED: Issue that happens when players spawn into game at wrong time. - CHANGED: Made the instruction on how to enter the game from the tutorial screen MORE visible. If after 8 seconds you haven't entered the game yet, big arrows will point to that instruction to type a greeting into the chat. You can't miss it! - CHANGED: Invulnerable for 10 seconds after joining the game from the initial mini tutorial screen. So that players don't immediately die when spawning into the middle of a high noon duel or hot town. - CHANGED: Invulnerable for 5-10 seconds after being revived, so that the same enemies don't immediately kill you again. - CHANGED: You can't revive yourself anymore. Only other typo hunters can revive you. - ADDED: A big red pillar to the sky appears over downed typo hunters so that teammates can find them more easily to revive them. - ADDED: Beginner's Lucky Grit - beginners get a good chance to avoid bullets when down to their last life. This chance decreases as you earn more money in over your career. The thresholds are: <$2500 (75% + grit), <$2500-5000 (50% + grit), $5000-7500 (25% + grit). All players, even existing players, start out with $0 lifetime earnings for this purpose, but your current cash is not affected. There is no way for you to see your lifetime earnings yet. Penalties, costs, and purchases are not factored into your lifetime earnings. - ADDED: Grit of the Poor: If your cash is under $100, then you get a (50% + grit) chance to avoid bullets when down to your last life. This increases to (75% + grit) if you're in debt. - ADDED: Grit of the Lone Hunter: If you're the only typo hunter in the game, then you get a (50% + grit) chance to avoid bullets when down to your last life. - CHANGE: The normal Grit trait now has 2X the chance of working on its own. It also gets added onto the chance for the other types of grit. - FIXED: Other players' bodies should now properly disappear when they leave the game. - ADDED: Flyup text when damaging property. - ADDED: Flyup text when damaging correctly spelled words. - CHANGED: In town defense jobs, the bandits now spawn more randomly outside of town and come in sooner, rather than just spawning in the corners and waiting for a while. - CHANGED: For town defense jobs, you can leave the town boundaries to hunt down any straggler bandits that may be right outside of town. - CHANGED: Renamed job "difficulty" to "vocabulary", since it affects the level of word, rather than the real difficulty of a job. - CHANGED: During jobs, players who are still in the tutorial don't count as living members. They can't save you unless they finish the tutorial. - CHANGED: Start with full health when returning to the game. Previously, it spawned you in with the same health you had when you last left the game. ROADMAP: - Add Leaderboards - More job types: train heist, wagon escort, outlaw camp raid, protecting the herd, culling the herd, rescue, speed shooting/spelling contest - More location types: graveyard, gulch, tribal town, plains, train - Word-horses and word-cattle - Word-horseback riding and related jobs andyman404 has not created any games yet