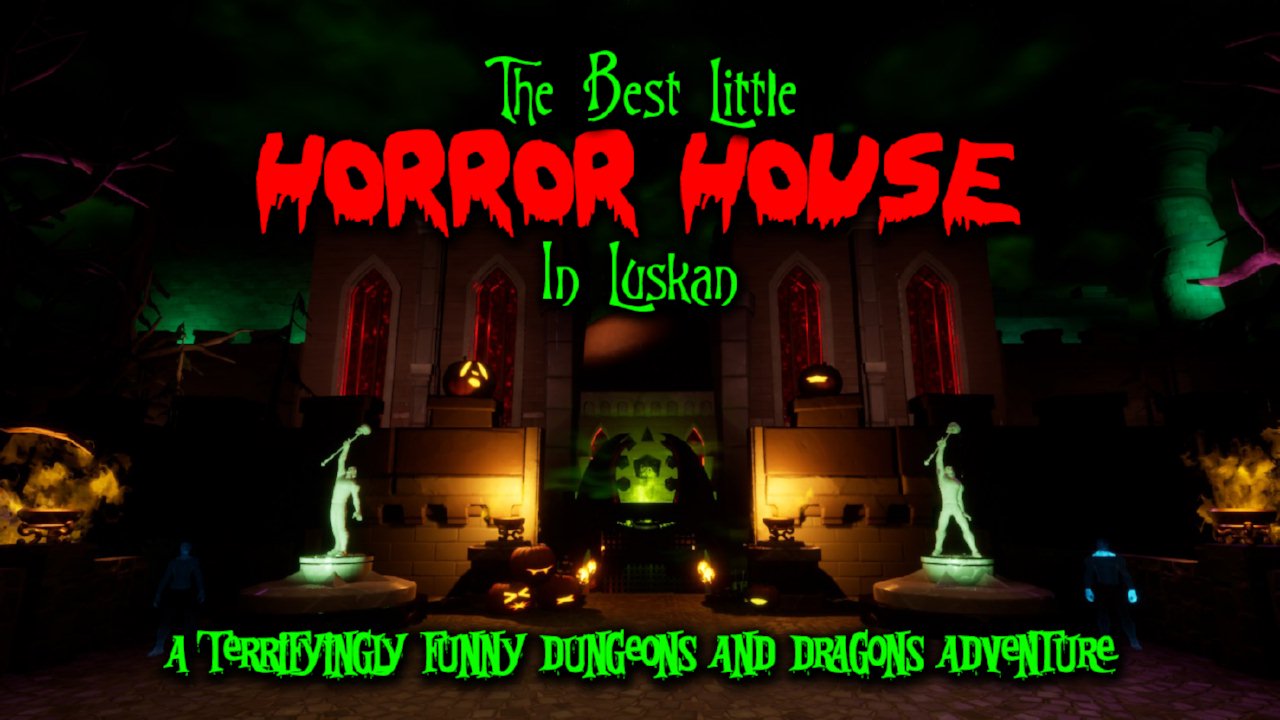 THE BEST LITTLE HORROR HOUSE IN LUSKAN Entry for the [DnD] Design-a-Dungeon Contest Category: Strongholds and Towers It was a dark and stormy night... and a boy is looking for love in all the wrong places. There's a castle outside Luskan that's been overrun by the minions of evil and a DM with a sick sense of humor. Join me as you infiltrate the castle and defeat the big bad evil bosses that lie within. Just be sure to bring some extra undergarments. 80% Exploration / 20% Combat FEATURES *Unique bosses *Frightfully beautiful environments *Lots of secrets to find *Dozens and dozens of jokes and surprises to find ABOUT THE AUTHOR Nathan "CircleToons" Fellhauer is a San Diego-based artist, bass trombone player, IT guy, pharmaceutical chemist, and most importantly, a stay-at-home super-dad. I knew nothing about Core when I started this project and somehow duct taped it all together in the end. I hope you have fun in my crazy little world. REFERENCES/SPOOFS/RIFFS 2020-this wacky year, Acquisitions, Inc., The Addams Family, An American Werewolf in London, Attack of the Killer Tomatoes, Beetlejuice, The Cabin in the Woods, Critical Role, The Cryptkeeper Five, Dean Koontz, "Dice, Camera, Action," Disney’s Haunted Mansion, Dracula, The Evil Dead/Army of Darkness, Frankenstein, Friday the 13th, The Grudge, Indiana Jones and the Temple of Doom, Invasion of the Body Snatchers, The Invisible Man, It’s the Great Pumpkin Charlie Brown, Little Shop of Horrors, Michael Jackson’s Thriller, Monsters Inc., The Mummy, The Munsters, A Nightmare on Elm Street, Oingo Boingo, The Phantom of the Opera, The Raven, Ravenloft, The Ring/Ringu, The Rocky Horror Picture Show, Scooby Doo, Silence of the Lambs, Sleepy Hollow, South Park, Stanley Kubrick’s The Shining, Stephen King’s Cujo, Stephen King’s It, Stephen King’s Misery, Stephen King’s The Mist, Super Mario Bros., The Texas Chainsaw Massacre, Tim Burton’s The Nightmare Before Christmas, Weird Science, Werewolf, Wizards of the Coast, Young Frankenstein, Zombieland... and many more! CircleToons has not created any games yet